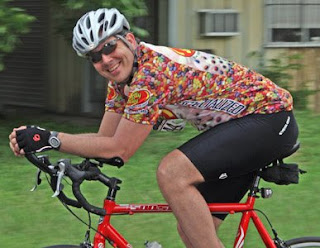 Thanks again to Patti Hill for putting on an amazing event. Adam, thanks so much for being the first to photograph me. As a photographer I thought you might agree with me that we are never captured but then I saw all those pics of you on the meetup page. Geez have you got
friends!

I did this ride alone but there were so many people out there that I never felt lonely. The volunteers were great and the rest stops were 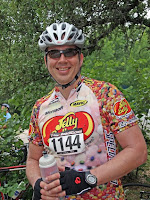 very friendly. I met a few people along the way and was inspired by other injured folks who fought through the pain like I did to complete this ride. This was another training ride in preparation for the Tour de Cure so I felt giving up would be like letting down all of the folks who sponsored me and I was not about to let that happen.

There was a killer hill that I like to refer to as the "KILLER HILL". =) I stopped to photograph it from the bottom and this old man turned to me 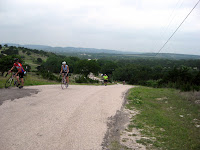 and said "you can't turn back now young man". Priceless. I think that this was near mile 40 or so of 63. I put my camera away and hit it as hard as I could. I know I had to stand up quickly and even when I saw others getting off to walk I was NOT going to do that. When I made it to the top I could barely breathe but I 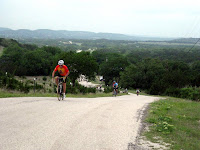 was victorious. I saw friends at the top high-fiving one another and I enjoyed the moment. I grabbed my camera and while gasping I took a few more shots.

Finally, in the last ten miles, I found a woman to chase. My knee was killing me but she was just fast enough to encourage me to push. My goal was to complete the miles, not make any kind of time records but then again I did want to cross the finish before all the sandwiches were gone. Her encouragement? "C'mon Jelly Belly!" I hope to see her again some day so that I can thank her for that. 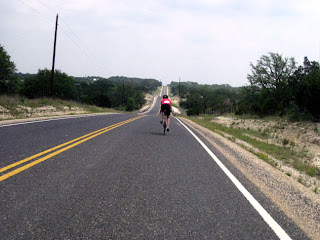 Patti, in case I didn't tell you, we all loved the ride and I will be back next year, to ride AND volunteer. The 2009 Armadillo Hill Country Classic
Posted by Carle Aldrete at 8:37 PM