Check out my about.me profile!

Posted by Carle Aldrete at 2:04 PM No comments:

My father worked in politics and government all his life. We grew up outside of Washington DC and every summer we returned to Texas to see family. Being one of five kids, I rarely saw one on one time with my parents but I had a great childhood. I am not embarrassed to say that everything I know about camping, I learned from my wife. This weekend is all about some g 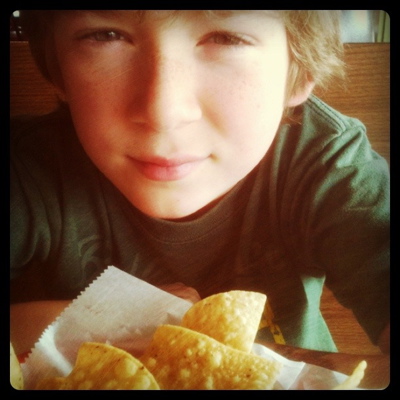 ood father-son time as I am taking my son camping and I promise you that we are going to have a good time.

Tristan and I were talking over lunch the other day and I teased him that I was going to have to cancel the trip. He's such a good sport but he did give me the stare down of a lifetime. We are both really looking forward to this and we really need this too. He thinks this is all about him but his loving heart really charges me. Watch, I will be a new man on Monday.

I hope you have a wonderful weekend too. Call me next week and let's get together and share some positive energy.

Our mission statement is simple,
“To make our customers’ expectations a reality.”

http://360presssolutions.com/
CarleA@360PressSolutions.com
Posted by Carle Aldrete at 8:31 AM No comments:

It’s so nice to see Spring again! Cyclists like me are definitely out there and enjoying this beautiful Central Texas weather. SXSW is coming to a close, daylight savings time has kicked in, schools are out for spring break and ahhhh, we will soon see some beautiful wildflowers lining up and down our highways.

A lot is going on, I know. I can sometimes hear the stress in your voice when I call. Take a moment to relax and breathe. Today I walked out onto the office patio and just enjoyed the breeze while I waited for the coffee to finish brewing. It was a quick recharge and it felt great!

The best part about my job building relationships with people like you. I work my tail off for you but I love a chance of just listening to you over a good cup of coffee. I’m here for you.

Have a great weekend. Call me when you get a chance and let’s talk.

Our mission statement is simple,

“To make our customers’ expectations a reality.”

Posted by Carle Aldrete at 11:45 AM No comments:

We earned our black belts and it did wonders for us. What an amazing experience that was! We have all the gear you need for dad and 3 kids.

It was hot but that was my best ride this season. I have a lot of miles to make up and a lot of stored fat to burn so plan on seeing me out there plenty these next few months. Man it feels good to be back.
MapMyRide - iMapMyRide: Jul 10, 2010 4:38 PM in Austin, TX

A New Year & Another Chance To Start Over

Wow that felt great. I went and rode with the Kevins today. Had my thermals on and that was more than enough to be comfortable for 28 miles in this weather.

Kevin 1 wasn't feeling well and had to turn back but thank God for him because he got me out of the house. Now that the weather is cold I really need a lot more encouragement/prodding to continue cycling… All ride invitations are welcome.

Kevin 2 stuck with me for the trip through Twin Creeks and back. It's funny, I fly down that hill a lot faster wearing pants than I do in shorts because I was not afraid of crashing. With the wind and the cold my eyes did water a lot and it was difficult to focus at 40mph. Anyway, we had a good chat about the church and it was a very enjoyable ride. We looked around at all the people walking and jogging and wondered how many of them were out there because of new year's resolutions. Although I am not one to make resolutions I do set goals for myself and I felt very much like part of the crowd.

What do you do to keep going?

Posted by Carle Aldrete at 8:31 PM No comments:

Man have I been away for a while. Training for my first century ride became such a serious

effort at the same time as my preparing for black belt testing that I was just overwhelmed and exhausted. Now I find myself slowing down and reading other people's blogs rather than keeping up my own momentum. Ugh, time to get back in the saddle Carle!!

I posted some pics on Facebook from the ride. It was quite an experience for me and thankfully my first Hotter N' Hell was gorgeous. I still broke a sweat but it was nothing compared to what most folks expect from this event. A record 14,200 cyclists showed up for this ride and that is a HECK of a lot more fellow riders than I am used to sharing the roads with.

The best part of the ride? I was happy to see the finish line ~ REALLY HAPPY!! I ruined a shoe recently during a 70 mile training ride in the rain but I had no idea how it would effect my

foot. During the last few rest stops I had to pull off the shoe and stretch because I was experiencing some real pain. At the end I was so completely exhausted but I mustered just enough energy to race Kevin across the line. We could hear people clapping but when the announcer recognized our efforts and the applause got louder it made the race across the finish one of the BEST experiences of my life. I coasted underneath some sprayers but that was not enough to wash the salt from my body. I washed up in the bathroom and then found my way to a massage table.

On my way back to Austin I fantasized about how many other centuries I would ride before the season ended. Reality = zero! I am still riding but 35 miles is enough for now. My goal is to keep it up through the winter.

How are you doing?
Posted by Carle Aldrete at 6:53 PM 1 comment: